URA’s Q4 2017 Flash data shows that prices of private homes in Singapore rose by 0.7 per cent quarter-on-quarter (Q-o-Q), ending the price decline since Q4 2013. The 1 per cent growth overall in 2017 reverses the overall negative growth since 2014 and indeed a positive turnaround compared to the past three years where demand was relatively weak and muted due to the imposed cooling measures.

This figure also endorsed the positive market sentiment experienced in the second half of 2017 with growth across all segments, CCR (0.8 per cent), OCR (1.2 per cent) and RCR (1.6 per cent) for the whole of this year.

Positive growth expected to continue into 2018 with expected 8 per cent price growth
CEO PropNex Realty, Mr Ismail Gafoor commented, “2017 has set a stage with positive market sentiment as we witnessed many buyers and investors moving in quickly to pick up units expecting further price increment moving forward due to the aggressive land bids at GLS and en bloc sites. This positive growth and price appreciation is expected to continue in 2018 for private residential market in the coming quarters with an upside growth of 6 to 8 per cent overall.”

Mr Ismail predicts the first half of the year with a steady growth of up to 3 per cent while the second half we can expect a greater growth up to 5 per cent. This will total the overall growth to be 8 per cent mainly contributed by higher price points at new launches which will in turn bring up the overall selling prices of the resale and existing launches moving forward. Prices of Public Housing continued its negative growth for five straight years, with a 1.5 per cent decline overall in 2017. However the 0.2 per cent drop in 4Q 2017 is encouraging, as compared to the 0.7 per cent decline experienced in 3Q 2017. Mr Ismail highlighted that the price decline in 2017 is highly attributed to the greater number of HDB owners and upgraders selling their properties in pursuit of upgrading to private properties this year. “With the positive sentiment in residential market as well as huge number of en bloc sales in 2017, we reckon a greater demand for HDB resale properties with some en bloc owners considering resale flats. There is a likelihood that HDB prices may well experience a positive growth of 1 to 2 per cent in 2018.” Mr Ismail added. 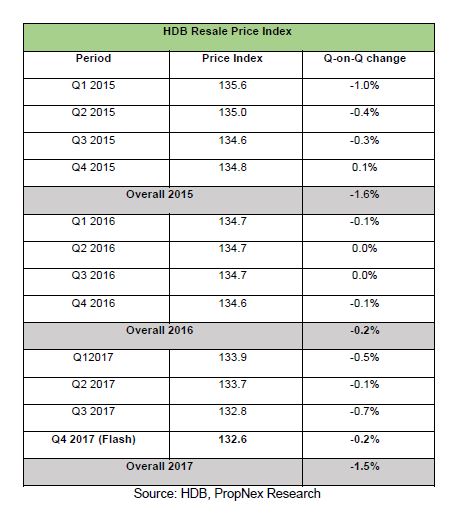